The Montesa Cota 301RR, awarded with a Delta price for industrial design! 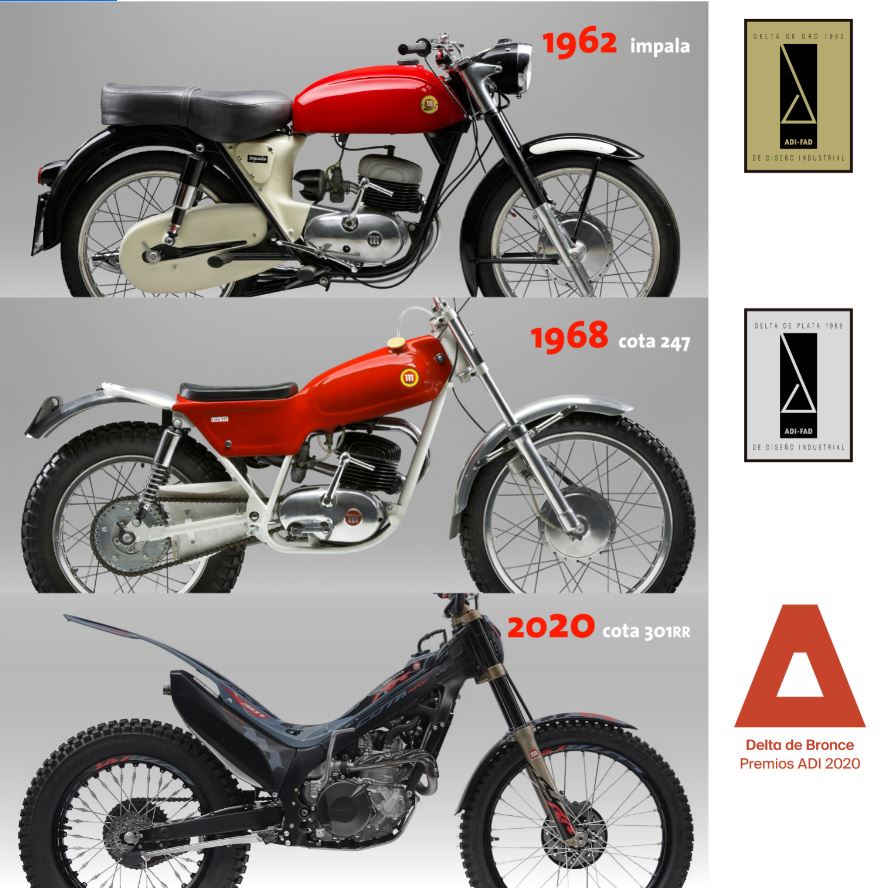 The Cota 301RR joins the Cota 247 and Impala which also won a Delta price at their time.

In addition to its commercial success, the new Montesa Cota 301RR has now been awarded with one of the most important design awards in Spain, given by the ADI-FAD (Industrial Design Association for the Promotion of Arts and Design). With this price, Montesa adds another milestone in celebrating its 75th anniversary.

Thus, Montesa continues to prove its incredible capacity for innovation and design in all their products, two of their most popular and iconic models having already earned Delta awards: The Gold Delta for the Impala and the Silver Delta for the Cota 247.

Historically, the Delta Selection has sought to recognize the work of industrial designers and manufacturing companies, it’s a true benchmark for the sector and an incredible platform for brand promotion and public recognition.

That’s why the work done at the Montesa Honda facilities, located in Santa Perpètua de Mogoda, is so relevant, that’s where the Cota 4RT260 and Race Replica, the 4RIDE and the Cota 301RR are manufactured exclusively for the whole world. In fact, all the production processes are carried out in the factory, including engine assembly, plastic injection, the manufacture of the aluminium frame, the gas tank, and the swingarm, processes that guarantee the high-quality level of the brand.

The Cota model has been in production non-stop for 52 years. It’s the only motorcycle sold uninterruptedly since 1968 in Spain. Its formula for success is based on a combination of a great R&D team and high-quality technology, adapting to the needs of the market at all times. That’s why the Montesa Cota is the longest-lasting motorcycle manufactured in Spain and the only motorcycle, not a scooter, that has been in continuous production in Europe for five decades. Since its release, more than 160,000 units have been sold.

The 2020 Delta Awards ceremony has been held as part of Barcelona Design Week. For the first time, the ceremony will be broadcast online and will be transmitted to all the world.

About the Montesa Cota 301RR

The Montesa Cota 301RR stands out for its exclusivity in terms of technological solutions, but also for being a model of the highest quality, the main reason for its well-deserved price.

This model, like its 260cc sisters, is equipped with a compact and revolutionary 4-stroke 4-valve engine fuelled by PGM-FI electronic fuel injection, without a battery, resulting in a highly efficient vehicle when it comes to emissions, as well as having significant torque and power figures. These are some of the main aspects that differentiate it from the competition, which mostly equips two-stroke engines.

The general concept of the Cota was to lighten the weight of the assembly as much as possible by using lightweight materials and simplifying the number of components. That is the main reason why the use of aluminium in the frame, swingarm, rims, wheel hubs, front suspension, footrests, and fuel tank is so noteworthy. Another innovative technical solution is the absence of subframe, its function performed by the same air filter box, which supports elements such as the rear fender and the muffler. In addition, the advanced fuel injection system does not use a battery and the design of the rear wheel with a central rib supports the use of tubeless tires, elements that contribute to the reduction of the weight of the assembly.

In turn, the design of the rear rim makes it easy to tense the spokes, something very important in trial, since the rear wheel is subjected to constant tension due to the large number of impacts to which it is subjected.

The model also uses carbon as an element of great lightness and impact resistance on the side cover of the engine.

The rear fender assembly has ribs that provide greater resistance to bending without the need to use a metal structure. Its design is made to grant protection against dirt and mud, as well as easy access to the air filter to facilitate maintenance work.

The design of the bike is based on the fact that the rider has to be able control the bike with his or her legs while maintaining the maximum freedom of movement possible. To this end, the Cota 301RR forgoes unnecessary elements that could interfere with a compact design where everything is perfectly integrated as well as protected in case of a fall. The excellent quality of the virtually unbreakable plastics is also one of the great assets of this bike.

In addition to compactness, trial models require high ground clearance to avoid impacts on the engine bottom. To make this possible, the bike features a sturdy crankcase skid plate, also made of aluminium, which in turn functions as a resistant component of the frame assembly.

Another safety measure are the solid-core brake discs to protect the extremities, mainly the fingers, when the wheels are in motion.

The clutch system is hydraulically operated, thus ensuring a higher level of control to the rider, as well as reducing the riders’ level of fatigue.

The rear suspension benefits from an advanced Pro-Link progressive system, which allows a longer rear suspension travel using a small shock absorber to achieve the objectives of compactness and lightness needed for this model.

The 301RR is the most powerful mass-produced Cota model. It is a motorcycle designed to compete, hence its name RR (Race Ready). The model has the proven experience inherited from the competition machines used by Montesa riders in World Trial Championships, from which it adopts most of its components and technical solutions.

In terms of design, the new Cota 301RR has more aggressive and angular lines, providing a sportier, more modern look. To this effect, the model has a new higher rear fender and a redesigned fuel tank, leaving behind its rounded shapes to make way for a sportier design. It also features a new LED racing headlight.

However, one of the aspects that will draw attention even more are the new colours of this model, never seen before in Montesa or on trial bikes. It is a dark grey colour which, combined elegantly with the unmistakable Montesa red, and some white details, gives it unprecedented originality and allure. This innovative combination is reinforced by the elegant gold of the fork sliders and some other components. Furthermore, for nostalgic riders, the Cota 301RR is also available in the red and black option, more in line with its predecessor, the Cota 300RR.