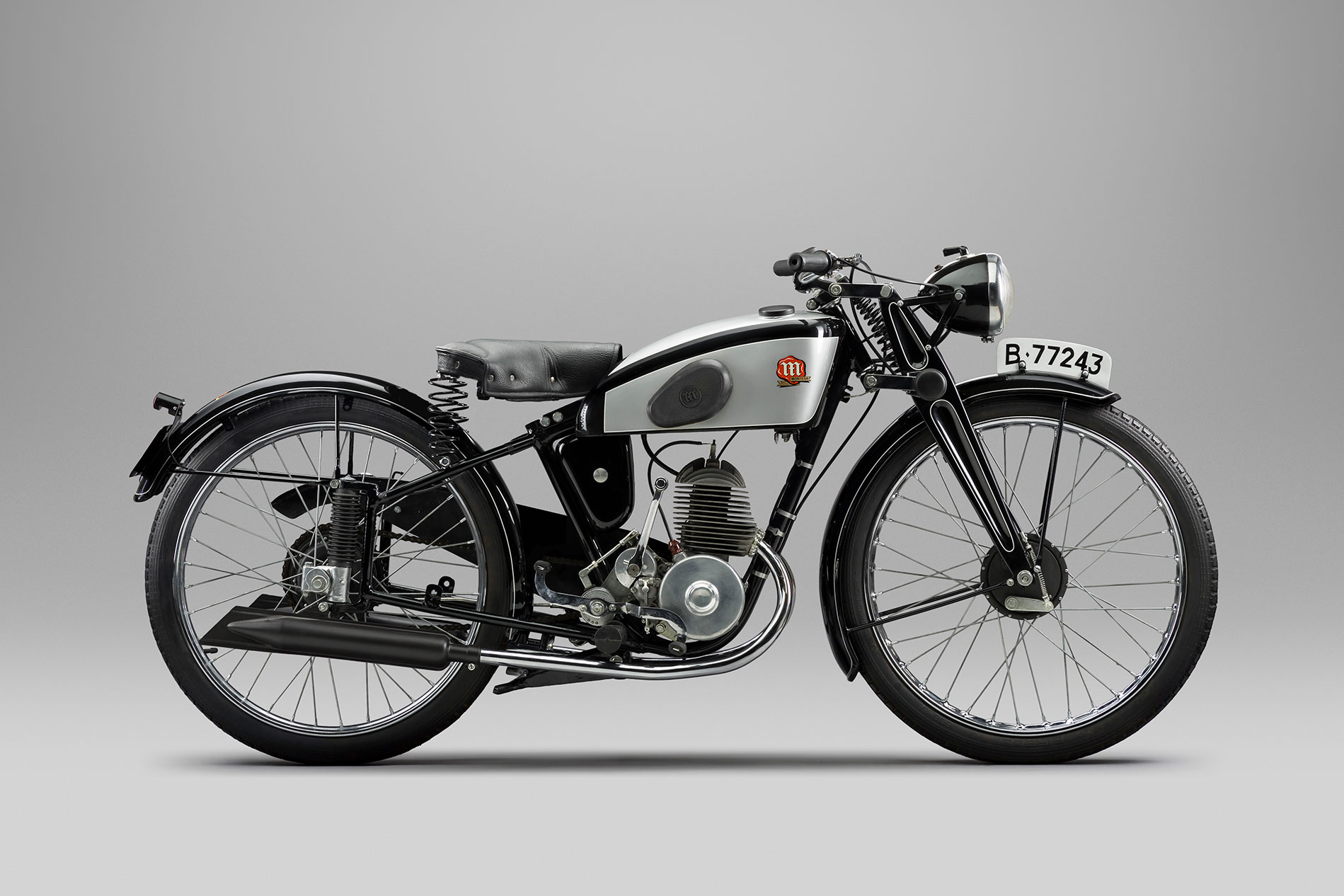 From its foundation in 1945 until today. Montesa, a very alive brand.

The history of Spanish motorcycle industry is very passionate. With hundreds of short scale brands, only a few of them survived until the end of the 60’s of XX century. Only the ones with bigger volumes managed to survive to the improvement of Spain economic conditions and the beginnings of the affordable automobiles. The stronger brands found new business opportunities in the off road motorbikes until oil crisis and the end of dictatorship industry protection in mid 70’s. These two factors made disappear an important part of the Spanish motorcycle industrial history.

In this section we propose you a quick journey through the history of the Montesa brand, one of the most known Spanish brands, still active today and still winning world titles with the motorcycles it produces.

a new brand is born

Success story and a new factory in barcelona

The most successful era
trial bike is born

a new brand is born

Success story and a new factory in barcelona

The most successful era
trial bike is born 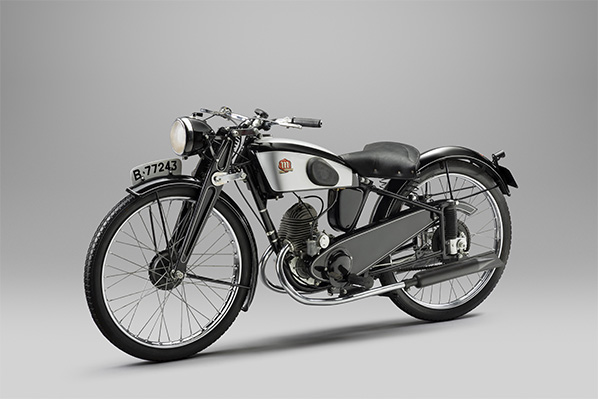 The beginning of the brand. First factory in Barcelona. The difficulties to get supplies after the war. Models A-45 and B-46/49.

The forties were difficult times in Spain. The country lives isolated from Europe and suffers from an evident shortage of materials and ancillary industry. Given these difficulties, the idea of starting from scratch was abandoned and made the decision to simplify the manufacturing process by copying an existing model, the Motobecane B1V2 that Francisco X. Bultó, co-founder, had given to his nephew and from which they took advantage of everything except the fork, fenders, exhaust mufflers.
Mass production started in 1945 with the model named A-45.
The name Montesa is taken from the cavalry order of the same name, founded by king Jaime II of Aragon (13th century), associating the new motorized horsemen with those of medieval horsemen. The first Montesa shield takes the form of a wax seal showing a medieval "M". 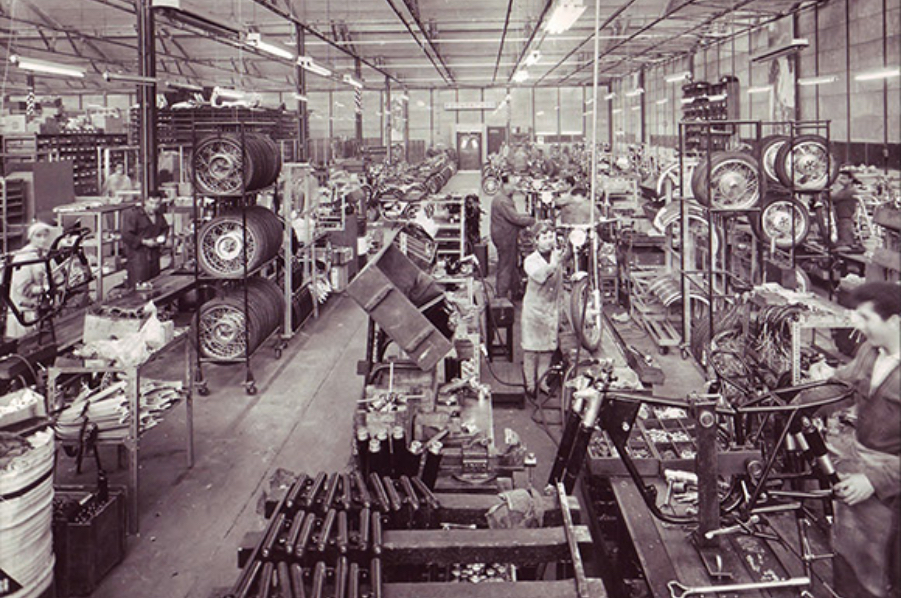 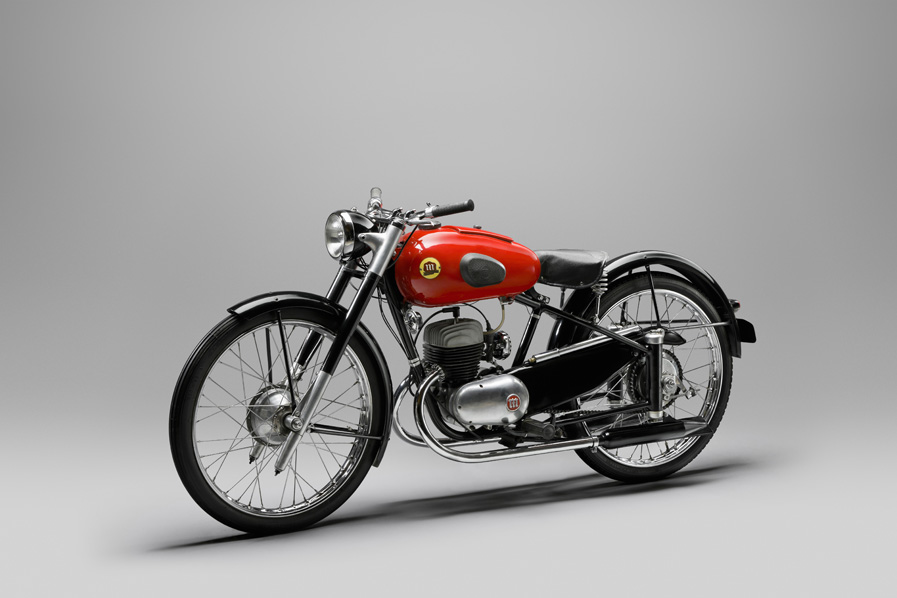 In February 1953 the Montesa Brío 90 was introduced, with important modifications to the engine, which translated into greater power and acceleration.

The Brio series were manufactured in large numbers for that period in Spain.
In 1958, the Spanish government decided to implement a very restrictive economic plan, to reduce inflation and eliminate the public deficit. The general cutback forced a business restructuring in most companies, and Permanyer to suspend all its racing activities. Bultó did not accept this and decided to leave the company. Several members of the racing department left with him. Permanyer was taken completely by surprise.
The situation was complicated for Montesa, but Permanyer faced it with his usual determination: he renewed the Board of Directors, placed Leopoldo Milá at the head of the technical department, and restructured all other departments.
Milá was about to create one of the most important products in Montesa history, the Impala. 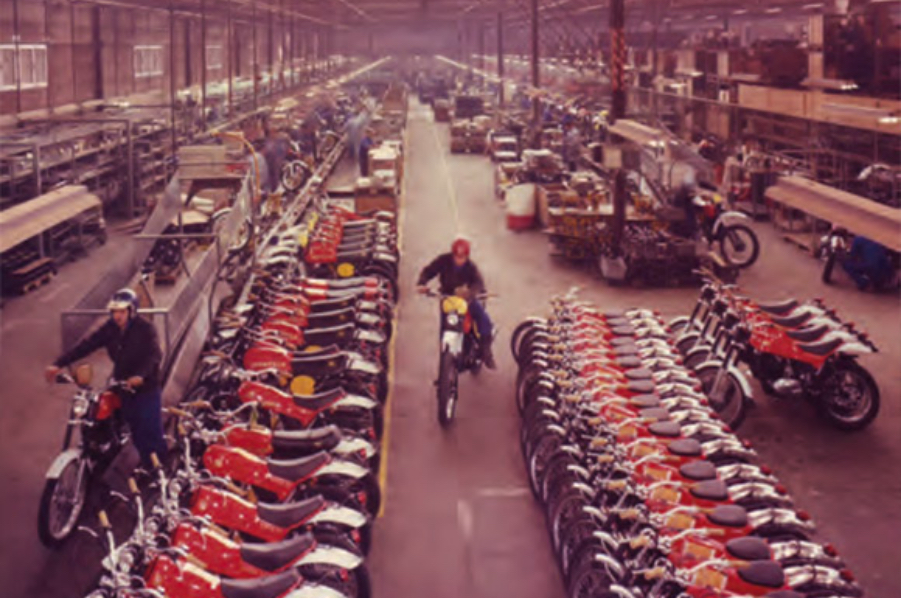 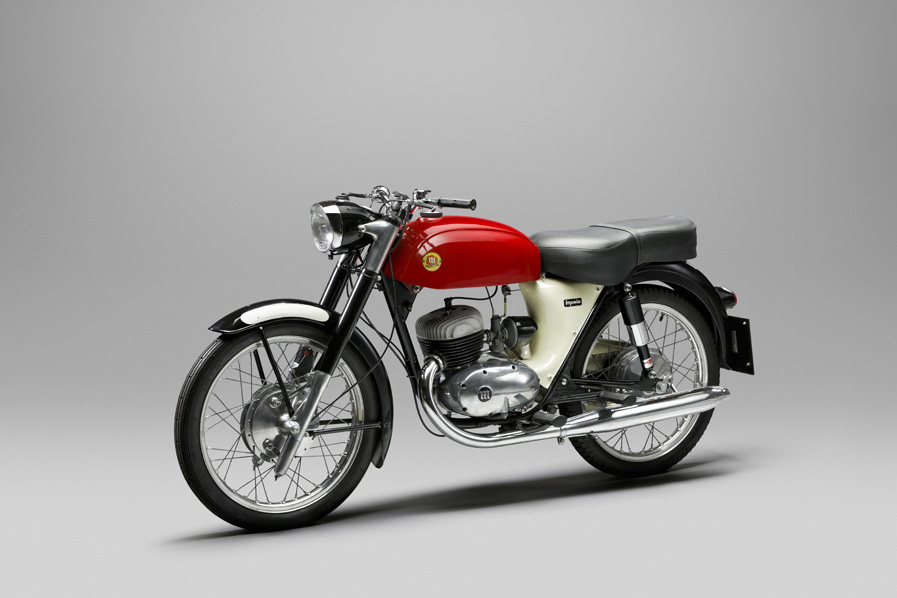 On September 1961, starts the construction of the new production plant in Esplugues del Llobregat. The production started next year.
One of the objectives of the Impala project was to ensure the quality and reliability of the product. It was with this in mind, that the idea of taking a motorcycle journey across Africa (Operación Impala), from Cape Town to El Cairo. Three prototypes of the Impala model with a supporting Land Rover, set out on the adventure on the 15th of January 1962. In 100 days, they covered some 20,000 kilometers.
The Montesa Impala was awarded as the best industrial design in 1962.
The impala was declined in several versions, Impala (model 4M), Impala Sport (model 3M) and the Impala budget version called Comando (model 6M). Later a 250 would be joining the range.
The North American market created great expectations for exports. The importer from that country, started his activity in 1963 by importing some Impala 175 Cross, called "Scrambler" in its American version.

In 1965, Montesa decided to explore the moped market (50cc). This was the beginning of the production of the Montesa Ciclo.
In April 1967, the first Montesa mass-produced trial bike was presented in Barcelona. It was the 250 Trial, only 44 units were manufactured. After extensive testing, in 1968 Montesa had finally created a competitive bike and its commercial name would be Cota 247. 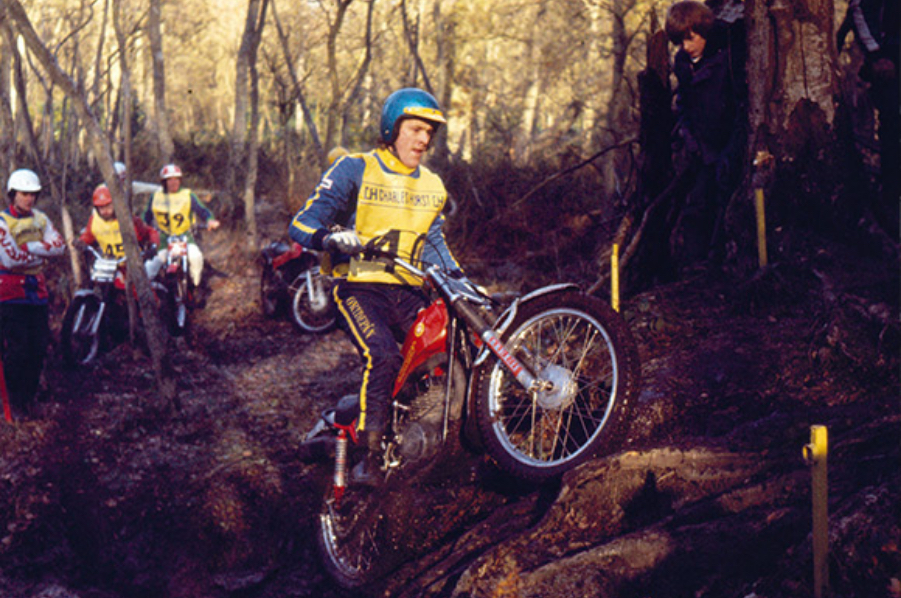 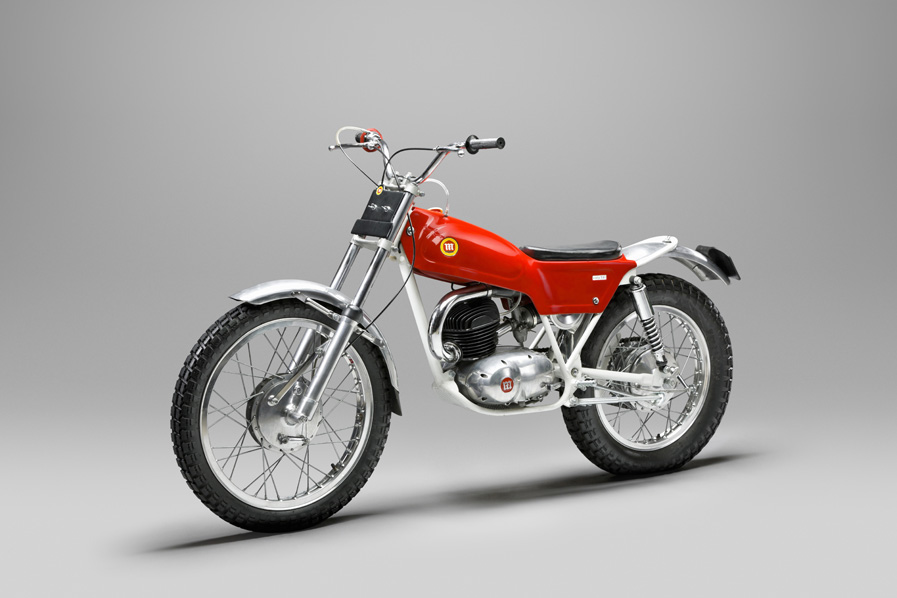 Montesa is reoriented towards the development of off road bikes.

Despite certain instability when General Franco died in 1975, the decade of the 70s was a brilliant business period, thanks to the success of the extensive range of trial models and the competitive motocross Cappra models. Also the exports grew significantly contributing to the overall good momentum. The best trial riders in the world were competing to enter the official Montesa teams. Production is organised in different specialised parts companies to achieve better efficiency. Montesa factory in Esplugues does the final assembly. 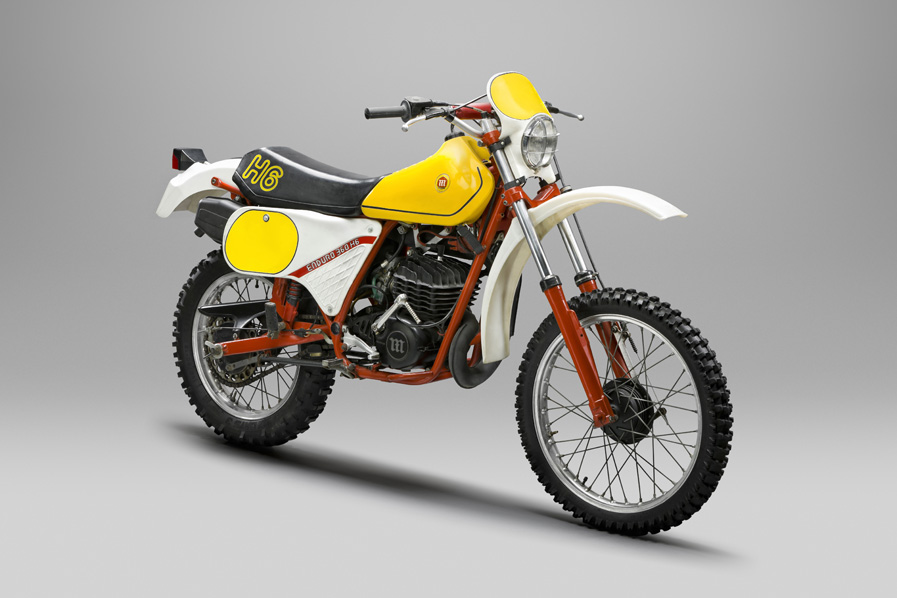 At the end of the 1980s, Spain entered a hard economic crisis and the motorcycle sector was doubly affected by the economic crisis in Spain and the growing competition of Japanese brands in foreign markets.

Traditional competitors such as Bultaco or Ossa went bankruptcy, on the other hand Sanglas is absorbed by Yamaha.
Thanks to Montesa's solid commercial and industrial organization, it managed to avoid total closure by reaching an agreement with Honda Motor in 1982. Thus, a new company was set up, called Montesa Honda S.A. with the commitment, on the part of Honda, to market special versions manufactured under the acronym MH of the popular Cota 125, 200 and 349 models, which were distributed through its sales network in Europe. 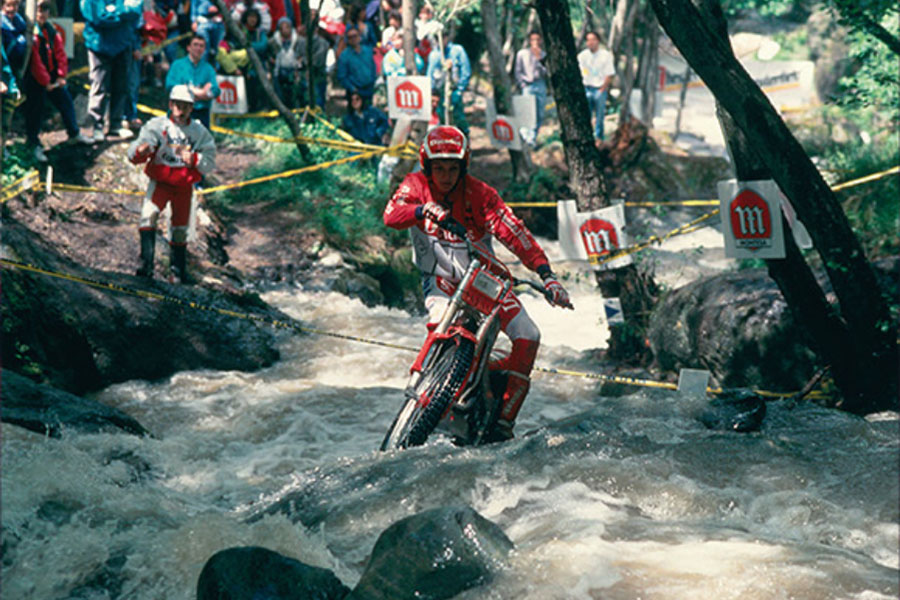 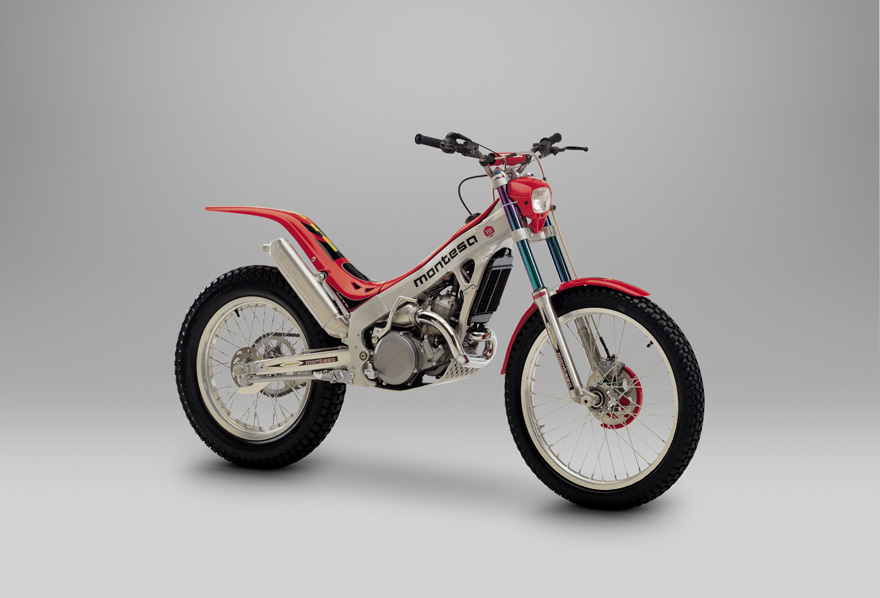 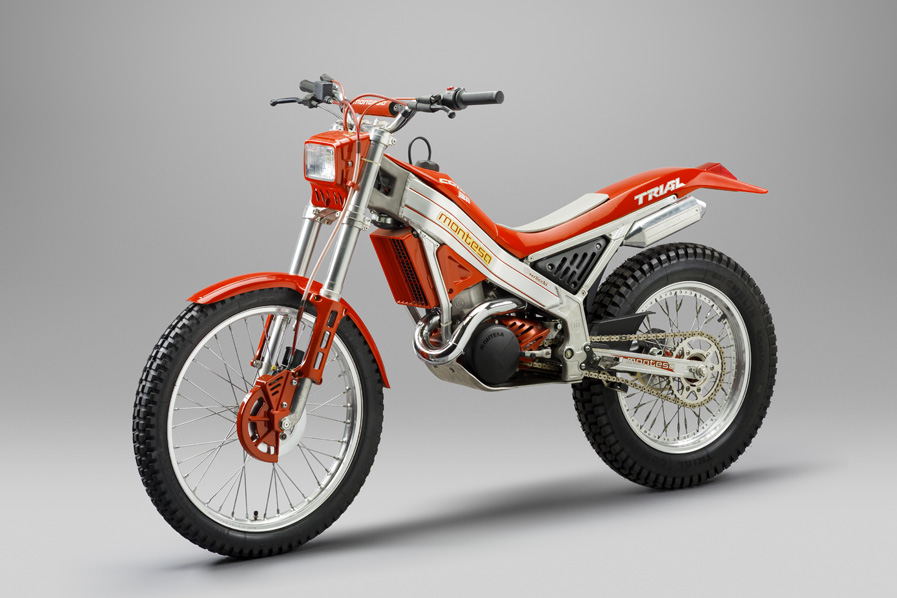 The Esplugues plant started production of the Honda MBX model in a 75cc version to sell it in the Spanish domestic market. This agreement was completed on July 1, 1986, with the absorption by Montesa Honda, S.A. of the remaining Montesa facilities and workers. The shared capital was finally decided with 88% owned by Honda Motor and 12% by the Spanish partners. The objective of this company would be the production, distribution, and sale of motorcycles under the Honda and Montesa brands. Unfortunately, and totally unexpectedly, Pere Permanyer died on March 20, 1987, at the age of 75. He could not attend the official ceremony for the factory refurbishment on April 3rd. 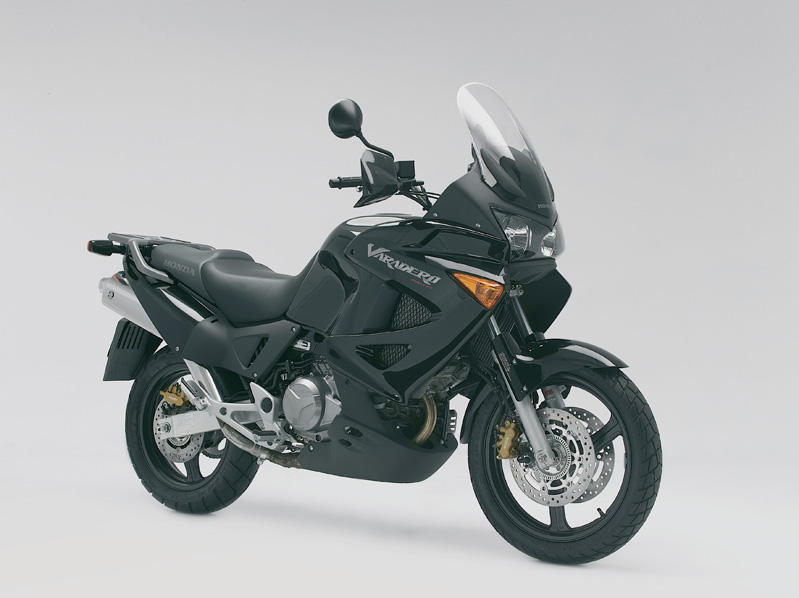 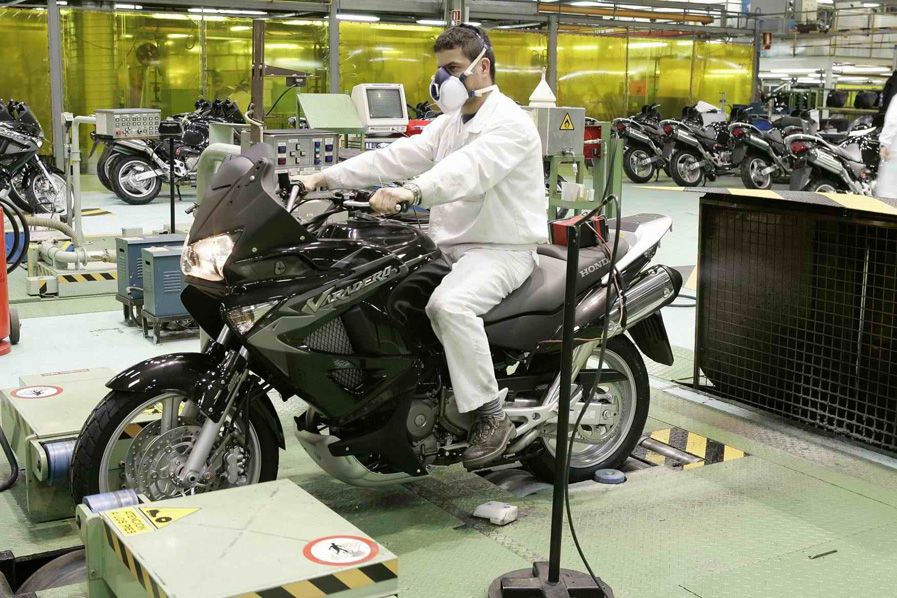 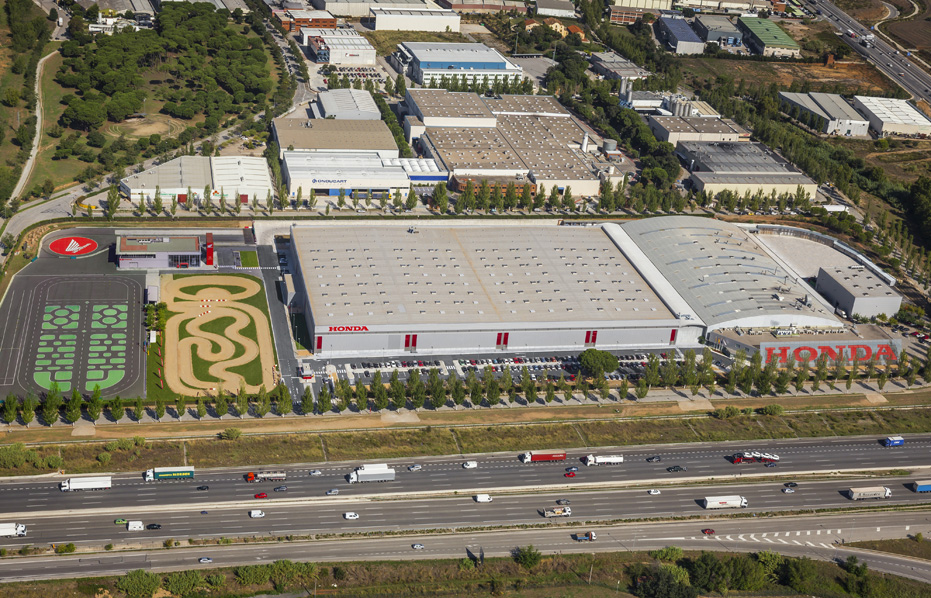 Montesa Honda's production plant was moved to Santa Perpètua de Mogoda, next to the company's commercial headquarters, in 2000. The plant specializes in the production of large-capacity motorcycles, such as the popular Deauville, Transalp or the XL1000V Varadero, the largest model ever made in Spain. The factory continues to manufacture trial motorcycles. The the Cota 315R was the last Montesa model to be equipped with a 2 stroke engine.
In 2004 the revolutionary Cota 4RT is launched with a four stroke engine. Montesa once again proved its insight into the future, and its commitment to society and the environment, with a motorcycle that is a technological benchmark that enjoys an excellent reputation for performance, quality, and efficiency.
After the 2007 world economic crisis, motorcycle sales plummeted and many of the Spanish manufacturers were forced to close their doors forever. 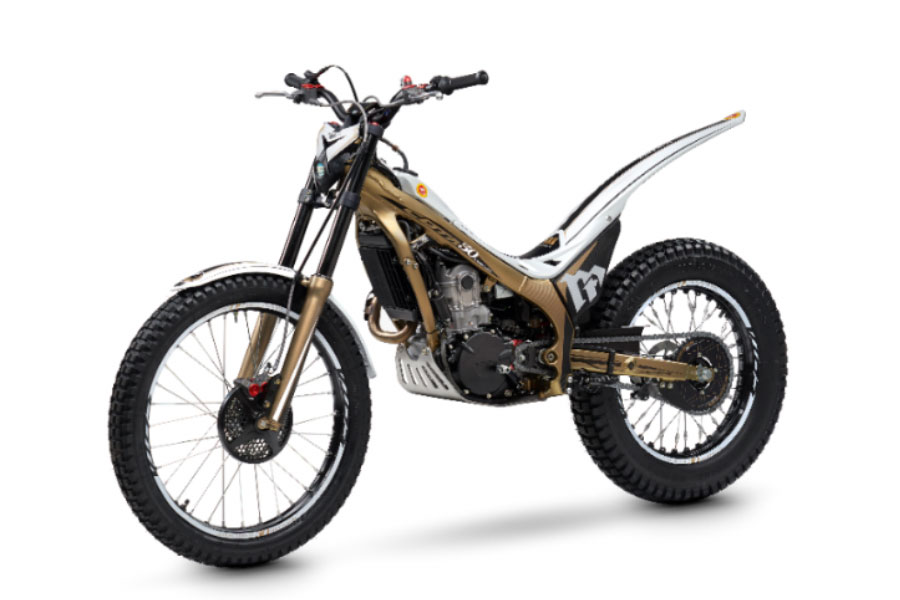 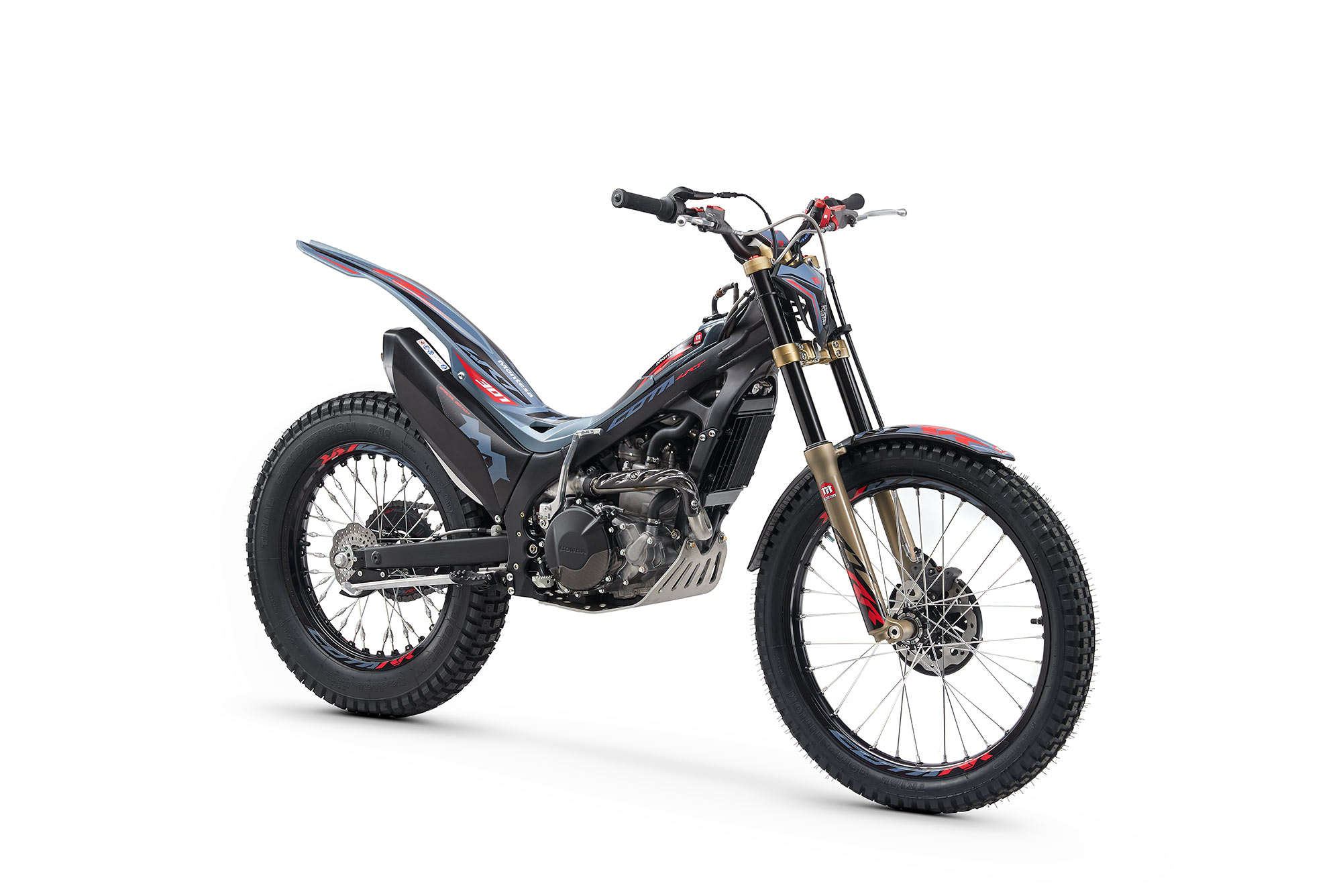 As of 2010, Montesa Honda's production function is based on the manufacture of both Montesa and Honda trial motorcycles exclusively for the entire world, while also incorporating the manufacture of components for the various business areas of the Honda group (Cars, Motorcycles and Power Products).

). It integrates industrial processes such as plastic injection, steel and aluminum welding, painting and assembly of motorcycles and components.
In 2016, Montesa decided to present the 4RIDE, a motorcycle focused on trial-excursion.
In 2018, the iconic Montesa Cota celebrated its half-century of life, launching a special version of the Cota 50th Anniversary, based on the Cota 300RR. This is the only model of motorcycle marketed uninterruptedly in Spain since 1968.
In 2019, Montesa launches the new Cota 301RR. The model has the proven experience inherited from the competition machines used by the Montesa riders in the World Trial Championship, from which it adopts most of its components and technical solutions.
In all its history, from 1945 to 2019, Montesa Honda has amassed a total production of 1,280,000 units, 445,000 units under the Montesa brand, and 835,000 units under the Honda brand. In its 75 years of history, Montesa can proudly boast of maintaining, year after year without interruption, the production of a model with the brand's emblem. This is an unprecedented milestone in the motor industry in Spain, being also one of the longest-lasting motorcycle brands in the world.

In 2020 we celebarate the 75th anniversary of the brand. We have created a dedicated logo and several activities will be developed during the year.

You can have more information of the Montesa history in this external link.