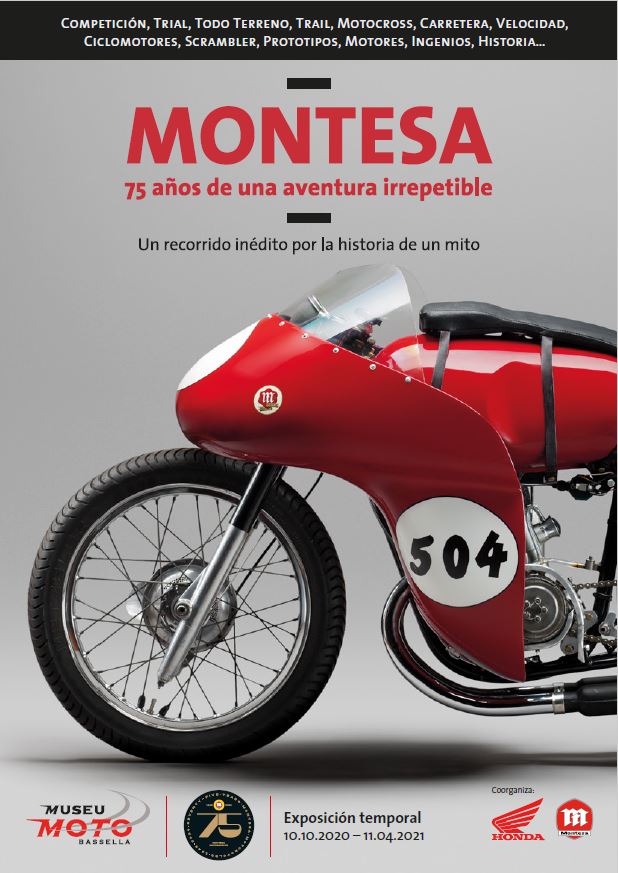 In 2020 we celebrate Montesa’s 75th anniversary, the brand with the longest history of motors in Spain and one of the longest-running in the world. To celebrate this event, Montesa is surprising us once again with a new and unprecedented exhibition. On this occasion, the exhibition will take place at the Museu de la Moto de Bassella, one of the most important museums in the world of Spanish motorcycles. The exhibition is already up and running and will be open to the public until April 11, 2021.

The exhibition “Montesa, 75 years of an unforgettable adventure” has little or nothing to do with the recently closed “Montesa, the forging of a legend” which was housed in the Palau Robert in Barcelona. If this first exhibition sought to display and showcase their most emblematic models through a chronological tour, this time, in the Museu de la Moto, the focus is very different. On this occasion, the visitors will be able to enjoy authentic collector’s pieces, many of them never seen before, grouped by categories: touring, motocross, trial, enduro, competition. This exhibition will also follow a chronological order within each of these categories.

According to the exhibition’s curators, Pep Itchart and Santi Ruiz, the show brings together the largest collection of private pieces ever seen. “It’s very difficult to get all the motorcycles in the exhibition back together under the same conditions. It is an unprecedented and almost unrepeatable milestone in the history of Montesa and motorcycling,” say its curators.

Among all the exclusive and important motorcycles that fans will encounter in the exhibition is a unique display of competition machines, including three Sprint models (1954, Leif Smedh; 1956, J. R. Eizaguirre; and 1958, R. Quinanilla), two models that participated in the Isle of Man TT (including the XLE-51, which managed to reach 135 km/h.), the first Montesa to participate in the ISDT (the D-51 Varesse), the 250 twin with a rotary valve engine (1966), the popularly known as “Uruguay” (1959) or a water-cooled Brio (1957).

On the other hand, the exhibition also includes some never seen before prototypes, such as the Fura (1958), a concept of innovation advanced for its time, as well as unreleased engine units, bicycles, and other products. Obviously, during the exhibition, fans will also be able to enjoy the most emblematic models of the brand, such as the Impala, the Brio, or the Cota.

The exhibition shows the importance of research and design, experimenting with new engines, and technical solutions for different disciplines of motorcycle practices. According to Itchart and Ruiz, “Montesa’s history is an example of overcoming obstacles. When the socio-economic context was not favourable, the agreement and subsequent absorption by Honda allowed the brand to subsist with a new range of trial models which now, alongside Toni Bou, are the absolute leaders in the World Championship“.

For more information and timetables: www.museumoto.com/